The second day of our self-guided walk started in Poggio San Lorenzo and took us to Poggio Moiano. It covered about 9 miles, taking us south through unsealed country roads, through the mountains and past lots of orchards, fields and farms.

Most of our breakfasts on the walk were pretty light, consisting of cappuccinos and light bread and pastries. Some of our stops did have continental spreads which usually added in hard boil eggs, yogurt, meats and cheeses. 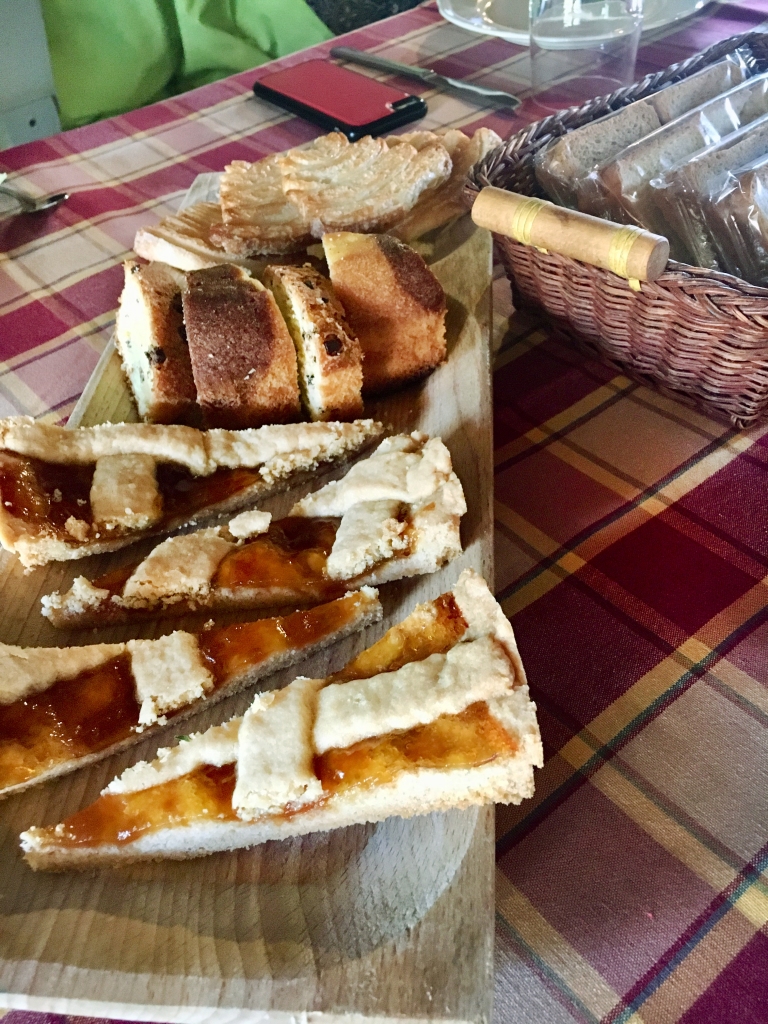 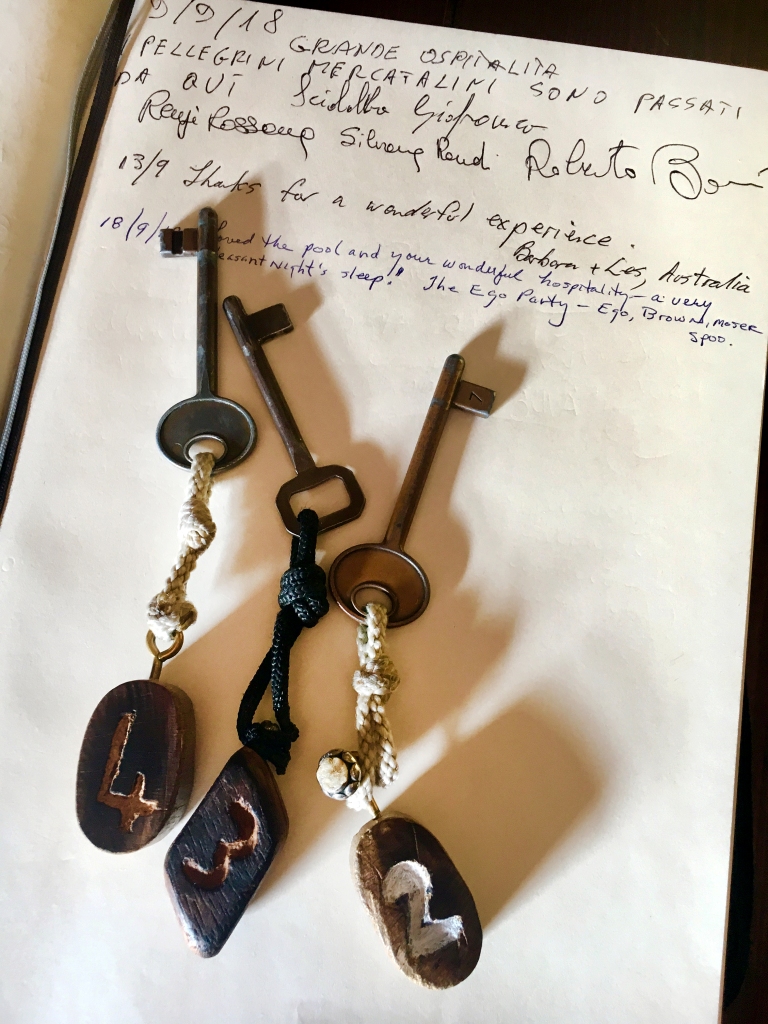 After resting the day before, my ankle was still really swollen and stiff, but I was determined to join my family again. It was definitely slow most of the time, but once I got going and loosened up a bit it wasn’t as bad. At least my hobbling was consistent 🙂

Our walk first took us through Poggio San Lorenzo, which was a sleepy little town that we stayed outside of the night before. It was interesting to see how each town differed and what remained consistent. They all were made up of earthy, warm colors, with a mix of different stone and bricks. The windows almost always had shutters and there were lots of little balconies, all garnished with greens and flowers. 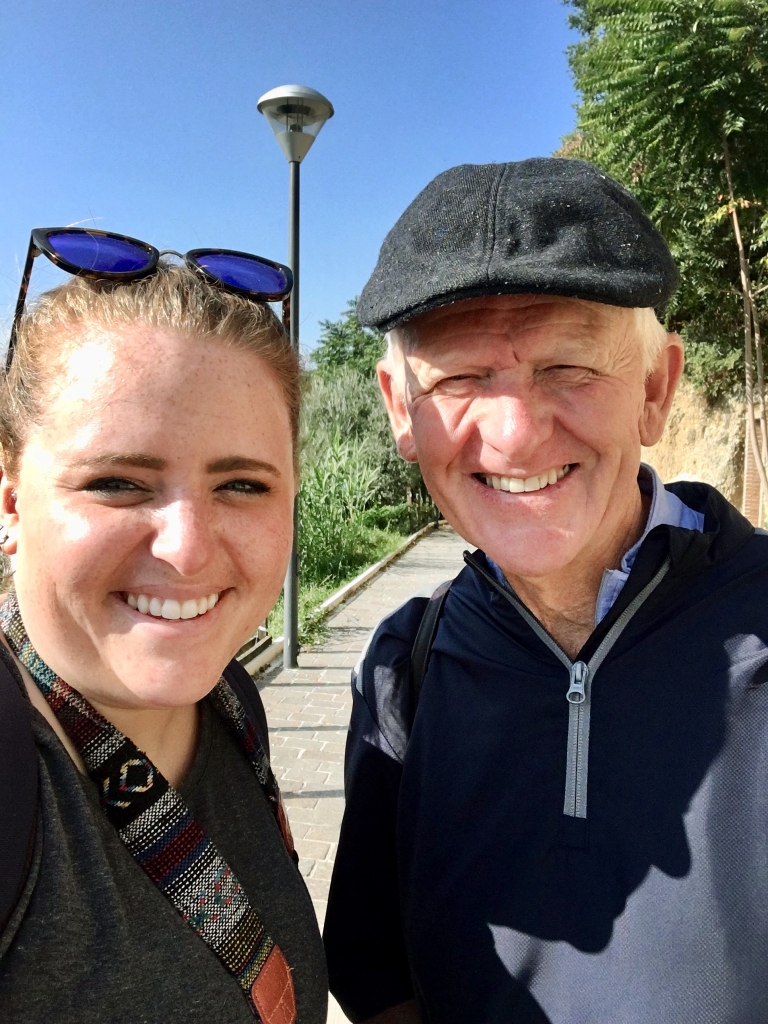 Most of our walk throughout the week took us through farm land. It wasn’t necessarily promoted this way, but after looking at the descriptions of the other walks the company offers, I’d say our could easily be dubbed the “ag tour,” which is obviously right up my alley. We saw hundreds of acres of olive trees, which is a commodity that we don’t know much about so thanks to Google for filling us in 🙂 We also saw quite a few different varieties of grapes, lemons, limes, tomatoes, berries, peaches, apples and various other vegetables. That is an olive tree orchard above. Some looked prettier like this picture, but most were not this well-manicured. The yellow and blue marker that you see above were the markers that coordinated with our guide book. Sometimes it was a sticker that looked more like a flag and other times it was painted on rocks, trees and posts. 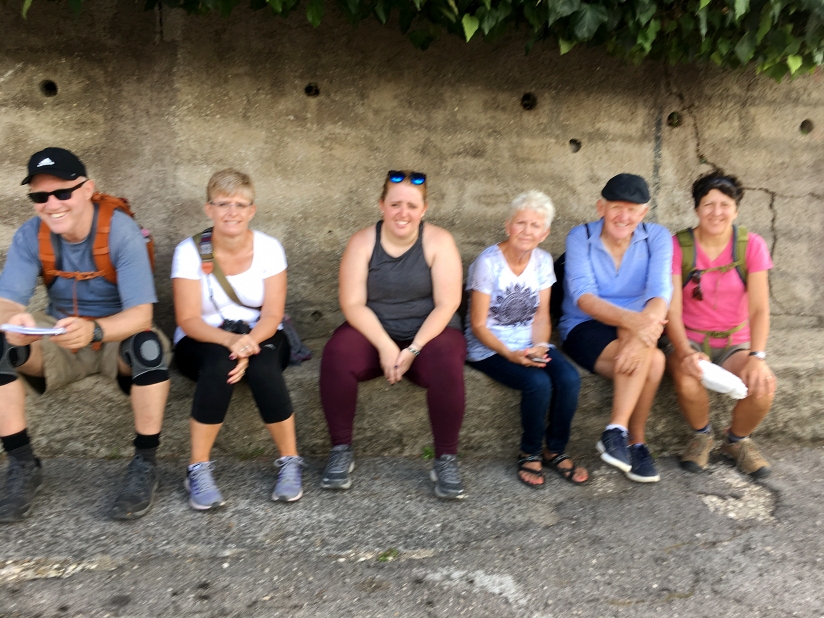 So there is a version of this picture that is not blurry, but no one is smiling in that one and this one makes me laugh. I was trying to explain to my Aunt that she could still step back further to take the picture but use her fingers to zoom in. I think she finally figured it out but by that time I think I was too worn out to continue smiling and it still ended up blurry 🙂

Anyway this is where we stopped in the town of Monteleone Sabina and rested after a pretty intense climb and found some ice cream.

This home was partially caved in and overgrown with vegetation. I took some video and other pictures of it, but its just not the same. It felt like I was in a different time. My Mom and I hung around for a bit and tried to piece together what the house would have looked like when it was all in one piece.

Our accommodations in Poggio Moiano were one of two that I didn’t care for at all. These were small studio apartments (except I think the one my grandparents stayed in had a few rooms) and functioned more like an AirBnB. They did have kitchenettes which was nice, but they were just a bit strange overall and not very comfortable. However, ironically, the dinner we had here was by far my favorite from the walk. As I mentioned in my summary post, all of our dinners and breakfasts were organized for us. It was prepared by the people who owned the apartments which were right next to their restaurant. We had a round of appetizers, multiple family-style entrees and a selection of desserts. If I remember correctly, nearly everything came from their extended family’s farm and garden, and it was all homemade. They didn’t very much English, but they had a family friend who did speak English serve as our host and shared about each dish as they brought it out. It was all amazing.

They brought us a bottle of both red and white wine, and with that good of a meal, there was no way that I wasn’t trying both. Plus I just walked 9 miles on a sprained ankle through the countryside so I shamelessly told my family that I thought I earned it.

Thanks for tuning in today! I believe I’ll be back on Wednesday with another post.