Hey friends, this is my last written travel journal entry, but I will be back tomorrow for one last post just featuring a “few” more of my pictures.

On Wednesday, the conference only went until noon and then we had the rest of the day to be tourists. I had planned on going zip lining with a group, but at the last minute opted out because this was going to be my only chance to walk around Antigua and through the markets. I had really been looking forward to zip lining and the videos my co-workers have from it were AMAZING, but I am glad I chose otherwise.

Antigua has a very simple, colonial feel, with lots of colors and textures. My co-workers gave me a hard time because I wanted to take pictures of everything – walls, floors, doors, windows – it was all so beautiful. I included a few of those pictures today, but the rest I will share tomorrow in my picture blog post wrap up. I’ll also mention now that it rained off and on all afternoon. I was the only in my group who didn’t have a good rain jacket. I own a few of those waterproof shell jackets that are popular in college but I figured that would be too heavy for the weather, so I didn’t bring one. Normally I wouldn’t have minded the rain, but I had my camera with me, so out came the poncho. There is a picture, but its on someone else’s phone.

We started out by getting some street food for a late lunch. I know that sounds a bit sketchy, but one of my co-workers, who is also fluent in Spanish, has spent enough time traveling specifically in Central and South America that we trusted her judgment. I can’t quite describe what it all was, with the exception of the papusas that we recognized from the hotel, but it was all so cute. Our dessert from another stop was mango slices that were covered in sugars and spices. It was a different taste, reminding me of some of the Mexican candy that I grew up around in Eastern Oregon. We also stop in a bakery (which are everywhere) to buy some wafer like cookies to share, as well as some tortillas to take home. 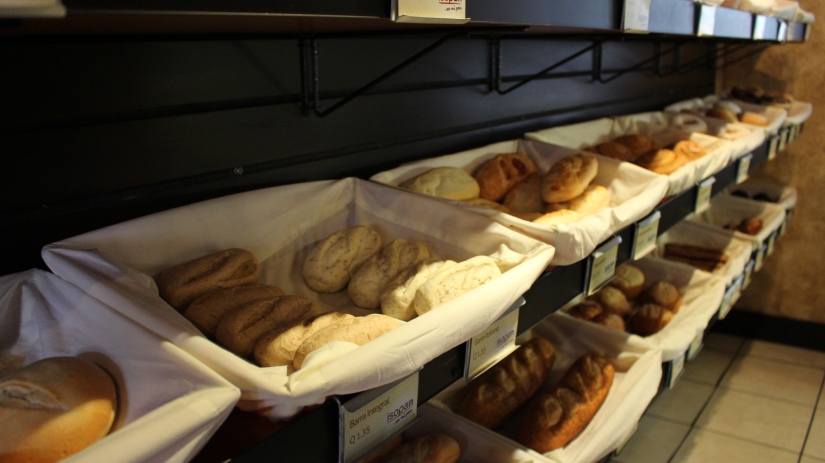 We spent the rest of the afternoon walking around two different markets. The first was less touristy, with lots of household and general items mixed in. The one thing I noticed all over Antigua that that there were a lot of shoe stores, pharmacies and bakeries. The second market had more of the type of items that we were interested in buying and was settled around the city’s main square. It was so overwhelming, my pictures do not do it justice. I had decided before my trip that it would be hard to do too many gifts for people because I would have to mail them once I was home, so I (selfishly) just focused on a few things I wanted. My main priority was some sort of artwork for my office. Everyone in my office has decorations from all of their international travel and my space kind of sticks out. Everything was so beautiful and SO COLORFUL, which was also difficult because my living room décor is somewhat southwestern with lots of oranges, reds and blues, so everywhere I looked there were things that would fit so well in it. In the end I fell in love with the paintings. Originally I wanted a much bigger and slightly different version of the painting of the women, but even with the help of my co-worker bartering skills, we couldn’t get the guy down on the price, and I settled for two equally as beautiful paintings. The bigger one, which I’ll have to have restretched, will go in my office and the smaller one will probably stay at home. 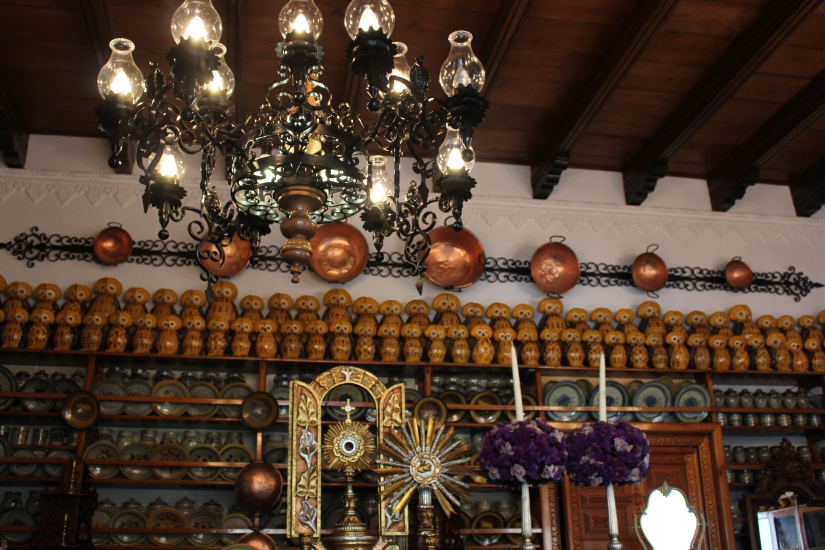 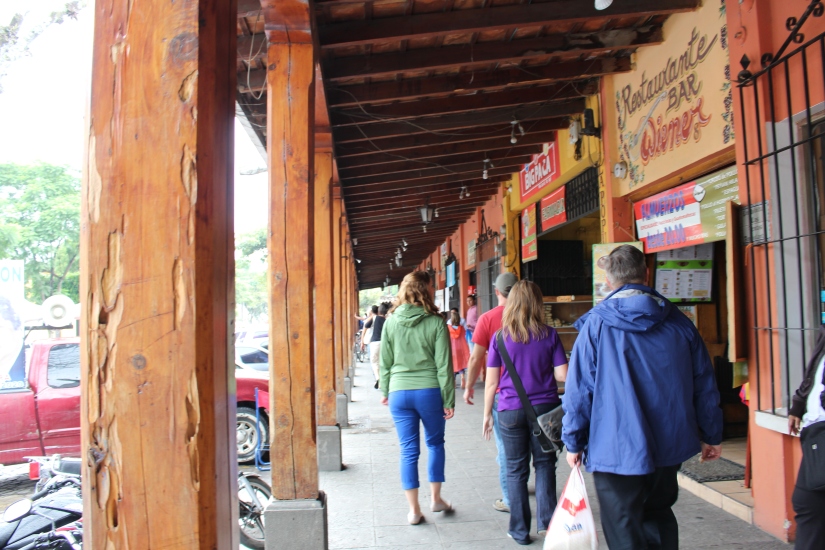 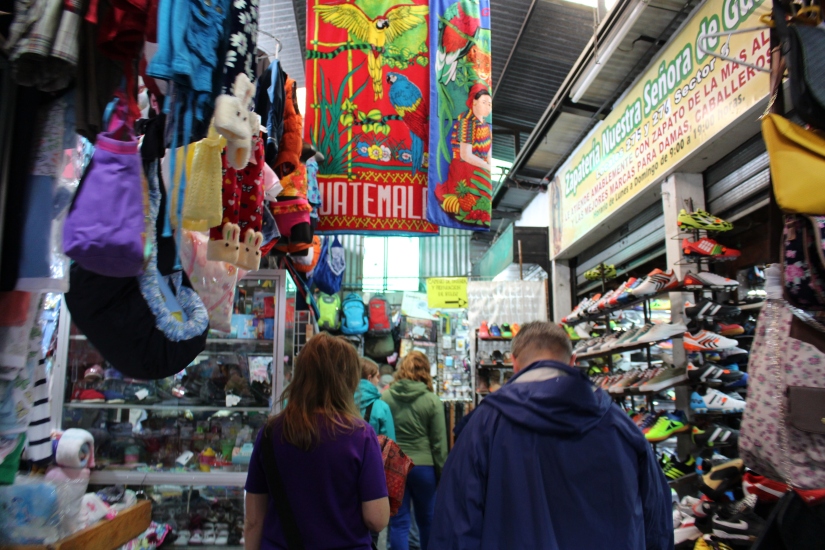 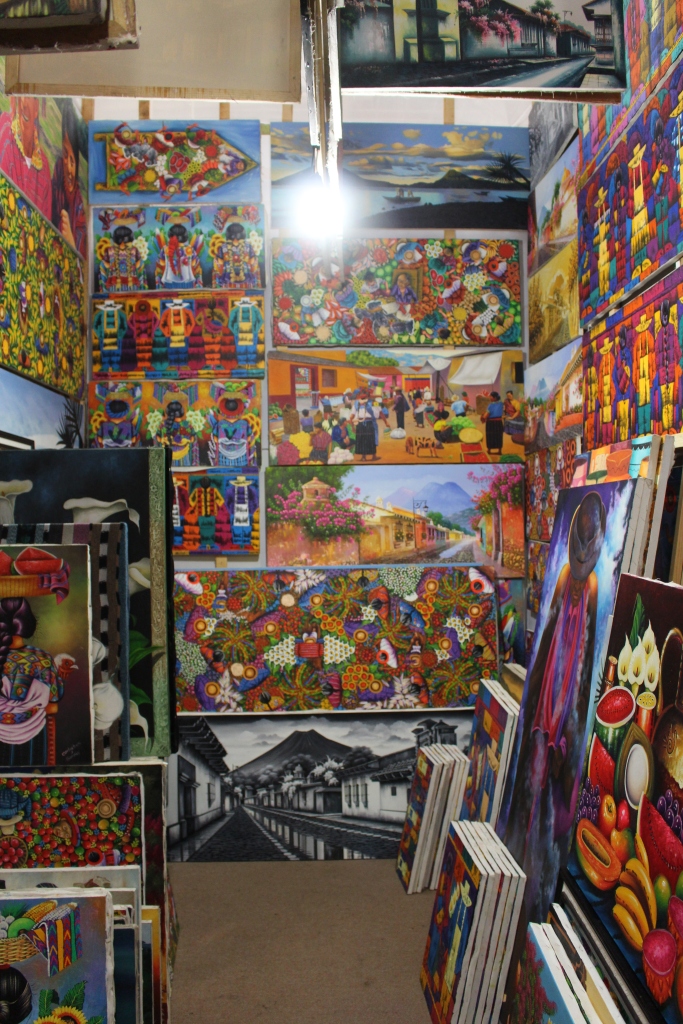 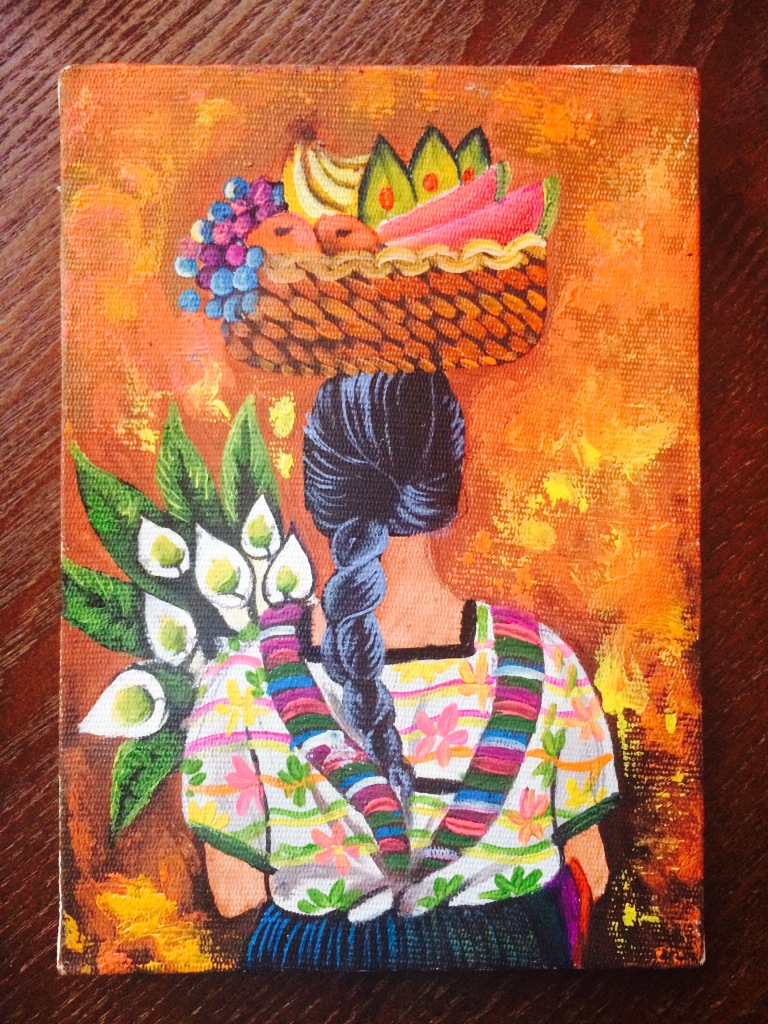 A few other highlights:

-At the market I also bought a hand-painted ceramic cross for my wall of crosses at home, a decorated small bottle and a thimble for my mom (her collection is impressive!)
-We went to a store called the “Choco Museo” and got to sample so many different coffees, teas and chocolate. Both coffee and cocoa are two of Guatemala’s top commodities and the store had a small educational room off to the side. I am visiting Kansas for a three-day weekend in October so I got a little bit of everything to share with my friends while I am there. I am so going to stash a bit of the coffee in my freezer to take home at Christmas.
-I really wanted to buy a jade necklace. I have a jade bracelet that I wear everyday that a friend brought back from China for me, but it was just a bit too expensive in Guatemala. Some of the spouses that were on the trip and got to do a lot of tours while we were at the conference were on the lookout for me, but even after taking a quick look myself, the ones that I loved were out of my price range.
-We stopped by the Casa de Ron, which sold the many different rums that Guatemala is also popular for. After someone bought a small bottle they invited us down in the “Rum Cave,” which was basically a really cool lounge down in a stone cellar. No, we didn’t get samples though…
-Except for my one bad experience, the food in Guatemala was amazing. However by the last evening I think we all were a bit ready for some basic comfort food, so one of our state commissions ordered Dominoes pizza for everyone in the hospitality suite. #ohsweetheavens #foreveracollegestudent 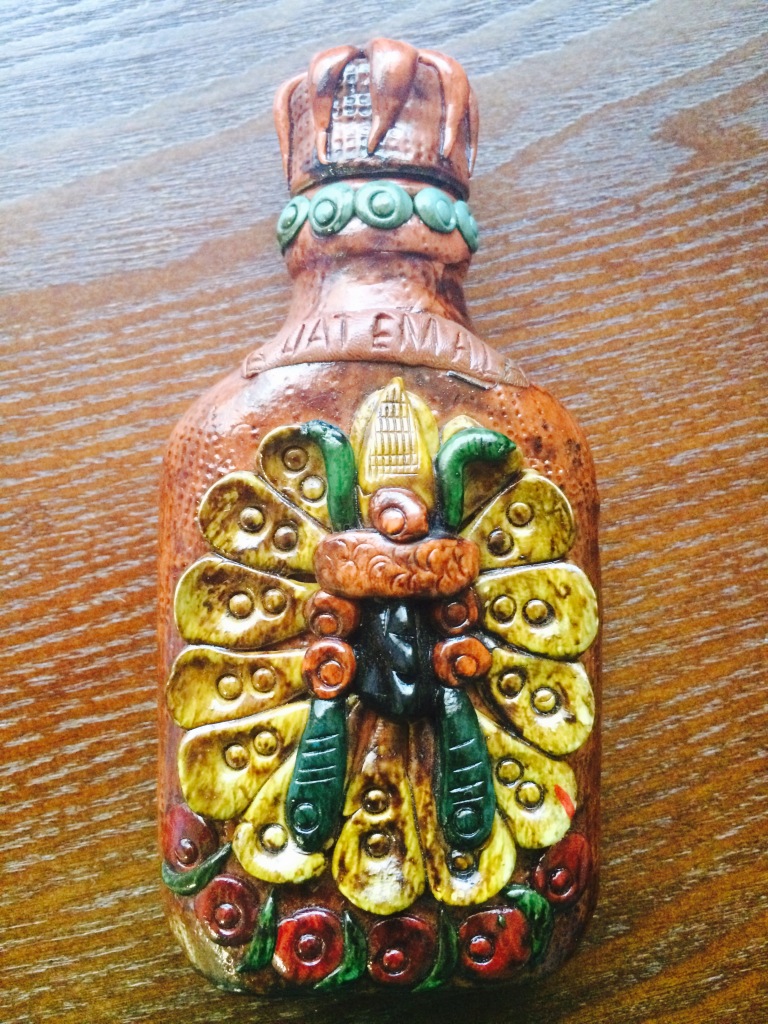 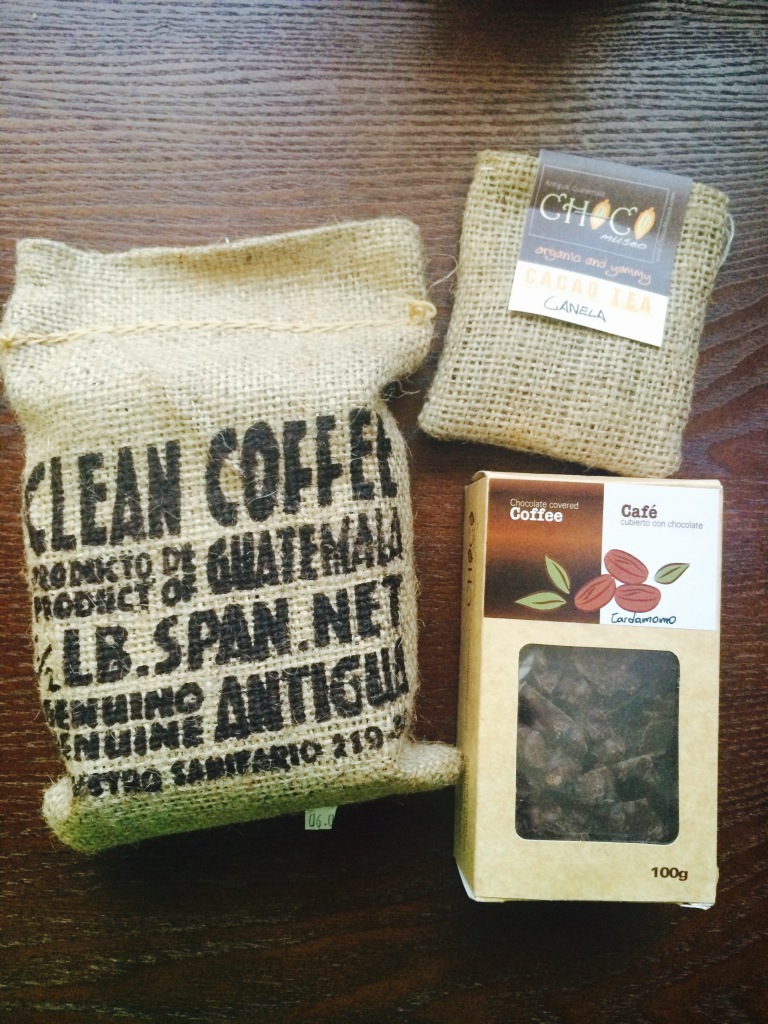 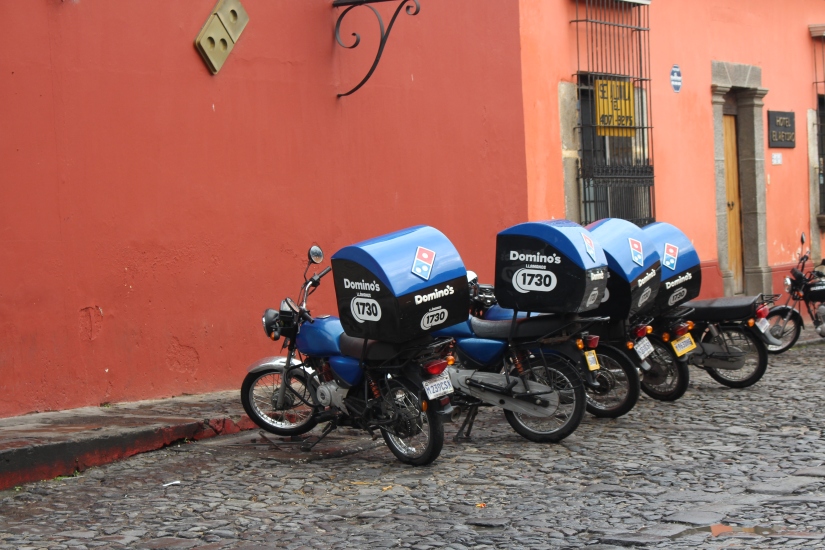 This was our travel day home.
Even though my group’s flight was not until 1 pm, they wanted us to head for the airport at 9 am. In my Day 1 post I mentioned that there was a lot of political stuff going on in the country. The presidential election was coming up and at the same time there was a lot of controversy surrounding the sitting President. On night 4 or 5, the sitting President resigned because of accusations of fraud. There were fireworks that night, that sounded more like artillery, and we assumed it was because of the announcement. Anyway, they were still concerned about traffic being really bad (which it was) so we started out early. Once we made it to the airport, we had a lot of time to kill, which would have been fine by me, expect the airport had hardly any AC! I know that sounds a bit petty, but it was very uncomfortable.

Our travel back to the states went smoothly and mostly uneventful. The connection was in Atlanta, and we were supposed to land back in D.C. at 10:30 pm, but a flight delay didn’t get us home until after midnight. The only exciting thing was that apparently Kate Hudson was with us in the Delta Sky Lounge. When we were leaving a random guy started telling us that he had gotten off of the elevator with her. After he described what she had been wearing, one of my co-workers finally said, “oh yeah, I think I saw that woman…” #areyoulivingunderarock?

**********
My heart is so full from this adventure. I may not be very well traveled yet, but I feel like I still knew how to appreciate the experience and what I have back at home. One thing is for sure, there is SO MUCH beauty in world, and I am so thankful that I got to explore a new part of it. Again, if you made this far, thanks for reading through my travel journal.