Linking up with Molly @ Colors of Life and Katie @ Better Off Benedict for their first Bookworm Wednesday Link Up!

I was really excited to see this link up get started! I am in Guatemala right now, but a little bit of planning ahead still allowed me to participate. I have been traveling a lot this summer for work so a lot of my reading has been on the plane and not as much as I would like. I went ahead and included all of my reading from this summer, not just August. (I also read two books for work, but I’m pretty sure no one wants me to review those.)

Also, speaking of Guatemala, you can read Day 1 and 2 from my travel journal HERE. I am a bit behind, so my post for Day 3 and 4 will be posted later today. 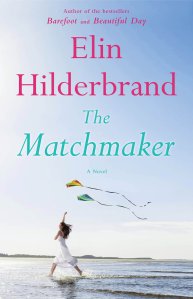 The Matchmaker by Elin Hilderbrand

This story follows Dabney, a native to Nantucket who has a knack for playing matchmaker, resulting in dozens of long-lasting relationships, and also knowing when a relationship is not meant to be. She has a complicated family and love story of her own, and when some of those things come back into her present-day life, everything about her well-ordered, simple life is turned on its side.

I am new to Elin Hilderbrand. The only other book of hers that I have read is The Island. I will definitely be reading more though! She’s a romance author, but her stories are warm, light-hearted and filled with characters that I think readers can really relate to at some point in the story. I’m really picky about romance novels, because I find most over the top, but I really like the other relationship perspectives, such as sisters, friends, mothers and daughters. I also love that she anchors all of her books around Nantucket, which represents something that is very important to her personal life and that show in her storytelling. I didn’t rate it quite as high though, because I felt that it was a little to long-winded, especially in the last few chapters. 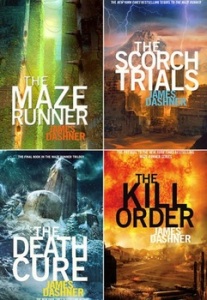 Thomas is thrown into a new world with no memories except for his name. Every month for a few years, a new teenage boy has arrived in the same way to “The Maze” with supplies that allow the group to live, and grow or raise their own food. Where they live is enclosed by a wall that opens up during the day into a stone maze, and despite organized efforts, they can’t find a way out. When Thomas arrives though, things start to change. The second and third continue to follow Thomas and his friends, as they realize that their time in the Maze was part of a much bigger purpose and that the danger and adventure has just begun.

Early this past spring I randomly rented The Maze Runner movie and really enjoyed it. Like music, I like a large variety of genres in movies and books. I had always hear this series grouped to together with the Hunger Games and Divergent series, but never given the same attention. A friend told me that the books were worth reading, but recommended getting all of the books at once because I wasn’t going to want to take a break even if I already knew what was happening in the first book. Yeah, that was an understatement. For a lack of better words, the rest of the series blew my mind. (Hunger Games SPOILER reference): you know in the second Hunger Games book when they announce that Katniss is going back in the area, and you kind of wanted to throw the book across the room? I felt that way at the end of about every three chapters throughout books 2 and 3. The entire story is really complex, action-filled and makes you think. I kept wondering when I would stop adding more questions to my list, which meant I was hooked but I also had what one of my friends calls a “book hangover” when I was finished. One major thought I had though was that it was a refreshing change, because unlike Hunger Games and Divergent, both the author and the main character are male, and that meant that everything had a different tone and pace. Overall I don’t know that I could pick a favorite of the three and the prequel is necessary to read (last), but stands on its own. Comparing it to the other series, I like it quite a bit better than the Divergent series, but Hunger Games is still my favorite.

A memoir/observational-essay collection from one of TV’s favorite funny gals, Mindy Kaling. She shares about her youth and her rise to become a staff writer and actress on “The Office,” and eventually her own, current show, “The Mindy Project.” It’s incredibly sassy, smart, sarcastic and hilarious. One review I read of it said, “It’s an autobiography crossed with witty observations with a twist of a shopping guide, and a pinch of Oprah-esque Your Best Life Now inspiration, told in Kaling’s singularly endearing voice.”

I have owned this book for over a year and continued to forget that it was on my shelf. That was my mistake. Seriously I want Mindy to be my best friend. I read this straight through on a coast to coast flight, and was definitely that obnoxious person cracking up as I read. Mindy is hilarious, sarcastic and very honest. I haven’t gotten a chance to watch much of her current show, The Mindy Project, but I loved her on The Office, so it was fun to hear her anecdotes from behind the scenes and how her personal and professional life has ebbed and flowed.

Libby Day was 7 when her mother and sisters were murdered in the middle of the night, on their failing Kansas farm. Based on her testimony, her teenage brother Ben was convicted on the murders. Years later, a “Kill Club,” made up of crime enthusiasts convince Libby to question everything about what really happened the night and the events leading up to it. Each chapter jumps back and forth between flashbacks and present-day, as well as between character perspectives.

This is the same author who brought us Gone Girl. Overall, I really enjoyed it, and if you like her other material or this genre then I would definitely recommend it. Like Gone Girl it was twisted, with well-crafted scenes and characters that you never really decide whether you sympathize with or dislike. It was a bit raw and crude at times, and it is also very hard to review without giving too much away. I will say that this one was just a tad bit predictable before I would have liked (still a good shock though) and I felt like after so much detail, the ending was kind of misplaced and hasty. On the other hand, this book makes you think A LOT, which I particularly like.