My job is so much cooler than yours.
Well at least this past weekend it was.

I’ve said it before, and I’ll say it again.
Bacon. Is. Hot.
So much so, that it gets its own festival in Kansas City.
That’s right, a whole day dedicated to that salty, savory strip of wonderful. And because of my job, I got to go.

Ladies and gents, I present to you: Bacon-Fest: The Other Fundraiser 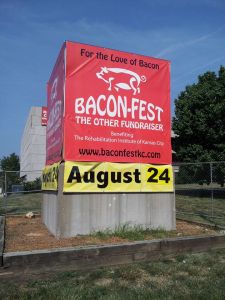 Bacon Fest is an annual fundraiser for the Rehabilitation Institute of KC, an organization that provides physical rehabilitation services to youth and adults in the Kansas City area. The event features dozens of eateries, caterers and companies who all bring their bacon inspired dishes for hundreds of bacon lovers and enthusiasts to sample. There were pulled pork sandwich bites, tacos, pizza, jam, cheddar meatballs, yogurt, various desserts and appetizers and more – all featuring bacon in some form. There were even two bacon inspired drinks, including a bacon bloody mary (I passed) and a bacon breakfast shot (definitely did not pass.) And Farmland Foods rounded out the bacon menu with simplicity, featuring eight or so different cuts and seasoned strips to try. The bacon is paired with a featured micro brew beer station, live local music and to round out the fun there is a bacon eating contest (we’ll get to that in a minute) and a bacon recipe contest.

So here’s where I come in. Kansas Pork is a sponsor at this event and this year we also featured a fun bacon photo booth that was complete with various signs and props that attendees could snap a picture in front of with their friends and then enter to win bacon by uploading that picture to social media, using the hash tag #baconfarmers.  Pretty cool, huh? The bonus for me (besides unlimited bacon to sample of course) was that I was able to bring along a few friends to enjoy the day with me. A huge thanks to Megan, Kyla and Elliott for tagging along with me and helping out here and there when we needed it. Overall the day what a pretty big success and a whole lot of fun. It’s still a little crazy to me that there is a whole food culture and fad built around this beloved breakfast food. There were so many crazy costumes, funny t-shirts, and fun giveaways. I think we decided that overall our favorites were the bacon cheddar meatballs, chocolate covered bacon, bacon jam, steak seasoned bacon strips and the bacon bloody marys.

And going back to that bacon eating contest… Now I’ve been to a bowl game, witnessed some buzzer beaters and am competitive to a fault, but I have to say, sitting front and center for a bacon eating contest is quite the experience. Competitors are given a pound of bacon and five minutes. The person who finishes first or eats the most (in weight) in that time period is crowned the champion – and people take this competition very seriously. If you know me, you probably wouldn’t be surprised to find me mocking this a slight bit, and I did, until this 120-something lb spunky middle aged woman won! This chick beat out 30 or so other competitors (mostly big burly guys) and won over the crowd at the same time. That’s the last time I’ll mock an eating competition.

If you are in or near the Kansas City area I encourage you to look into attending the event in the future. It is held near the end of August each year and goes toward helping out a great cause and organization. And…chances are, I’ll be there again. My roommate Megan is already eyeing her calender to make that weekend available to tag along next year.

As for me, I’m never going to think of bacon the same way again.